Independent on Sunday
Time Out
The Guardian (Irvine Welsh)
The Financial Times
The Times
The Tablet
Scottish Review of Books
The Scotsman
Scotland on Sunday
The Herald
The Sunday Herald
and more ...

Independent on Sunday - Murrough O'Brien
'Though the book is weak on belief, it is fascinating on atheism. The whole clan is present in all its diversity: from the fierce agnosticism of Catherine Craigie, Mack's sour but sassy confidante, the restless scepticism of John, his best friend, the tolerant humanism of Jenny, to the hard, hectoring faith of Peter Macmurray, which represents another kind of unbelief. Mack's father, the minister, could have remained a kirk cliche, but Robertson is in some ways on his side: he gives him some of the novel's most powerful insights... This is a hard novel to dislike, but a still harder one to praise from the gut.'

Cape Times, South Africa
'A remarkable and compelling novel...a strange and beautiful meditation on the tenuous nature of faith, and the thin veil between what the world wants us to believe, and what we ourselves know to be true. Also a slickly crafted page-turner, a mystery that takes you inside Mack's head and provokes more questions than it supplies answers.'

Kelly Vos, Daily Dispatch, South Africa
'Having begun the book with curiosity, I ended up eating it up in large gulps, neglecting everything else...Robertson's writing is wonderful. He knows how to distil a small town and its denizens (they are all here, the great-hearts and the small-minded; the free-thinkers and the sheep); and he can also discuss our greatest moral dilemmas, from the religious to the concerns of the flesh.'

The Guardian - Irvine Welsh
"The storytelling skills needed to balance Mack's repressed Calvinist childhood and his relatively liberated university days in Edinburgh with his subsequent descent into madness and/or the clutches of supernatural forces are considerable. If there's one factor that distinguishes successful literary fiction from the best genre fiction of, say, horror or crime, it's this unrelenting focus on character and place. Robertson pulls it off with aplomb, building up both the tension and the sinister elements in the tale without compromising either the humanity of Gideon Mack or the rich evocation of Monimaskit, its history and its inhabitants. The result is a novel which is very hard to leave alone, and one that forces you to think about its ramifications for a long while afterwards. The book thus becomes very much like the stone in Mack's conciousness - just waiting for you to go back to it.

Robertson's last two novels, The Fanatic and Joseph Knight, have established him as one of the foremost Scottish (and British) writers. The Testament of Gideon Mack easily cements this position, dealing with some of life's big themes: mental illness, death, (im)mortality and the way history and culture can potentially deceive as well as illuminate. In an age of obsession with cheap Z-list "fame" and reality TV, this overwhelmingly compassionate and thought-provoking book, destined to be open to several interpretations, poses stark questions about the anxious way we steadfastly avoid such grandiose topics. In the meantime, it demands another read."

The Financial Times - Melissa McClements
"A hugely gripping tale and a fascinating examination of the difference between faith and belief."

The Times - Kate Saunders
"Robertson is a true descendant of James Hogg - this is a superb piece of Scottish gothic."

Scottish Review of Books - Richard Holloway
"Robertson has written an attractive book about an unattractive man, and I can't quite figure out how it is done…There's a frozen spot in his soul, which is why it is not easy to like him. Fiery sinners are easier to love than refrigerated ones. And Gideon's a chilly bugger…You probably won't fall in love with [him], but long after he's limped away to his mountain death he'll blunder bewilderingly round your own consciousness, stirring up old obsessions, rousing buried anxieties…Religion in literature is back, coming soon to a wood near you." - Richard Holloway, Scottish Review of Books

Scotland on Sunday - Stuart Kelly
"Wit, scepticism and kindness are at the heart of Robertson's new novel…It is the story of a Church of Scotland minister who manages to be an outwardly kindly, socially responsible shepherd to his flock, however cold his heart actually is. He yearns to be a doer of good, rather than a do-gooder. Until he meets the Devil.

It is a fabulous fable, encapsulating the last 50 years of Scottish history while simultaneously being a parable about redemption, judgment and fidelity…a work of the highest literary quality."

Time Out - Rosalind Porter
"Drawing on myth, folklore, history and theology, Robertson's confident, restrained third novel is a beautiful account of a mind either gone mad or in the throes of complete sanity. It's the possibility of a seemingly unreal truth that makes Mack's story so compelling, and Robertson's unwillingness to impose a definite conclusion that marks him out as a master storyteller."

Sunday Business Post - Elizabeth McGuane
"This epic novel...journeys with dry humour into the private world of a man who is either very troubled, or a peculiar kind of prophet... Robertson has created a world in miniature, a perfectly rendered vision of an acerbic small-town Scotland peopled with instantly believable and complex characters." -

The Daily Telegraph - Lewis Jones "The Devil of [Robertson's] imagination is a disappointing figure. A peevish, vaguely homosexual lout, altogether lacking in grandeur or style, he takes evil to new levels of banality, sounding less like a lost archangel, and more like a pub moron...I was unable to detect any jokes at all in this novel."

The Sunday Telegraph - Matthew Alexander
"Subtly and assuredly done. A strange, rich novel of ideas about faith, Scotland and the way in which fictions shape our lives"

Big Issue in Scotland
"James Robertson has a formidable reputation, and this ambitious book suggests he may be the finest novelist in this country at the moment...an astonishingly accomplished update of Hogg and Stevenson, this could well be the best novel published anywhere this year." -

The List
'An intriguing psychological mystery...a subtle and involving engagement with the meaning of faith.'

The Tablet - David McLaurin
"Robertson does not give us sympathetic characters. Mack himself, an unbeliever, thrives on misery... As for the believers, they are cringeworthy: the unkindly named Revd Lorna Sprott breaks into metrical psalms, but cannot sing, and is loveless... When [she] is asked, 'Do you believe in fairies?', should we suspect that that the author is merely mocking us?"

The Scotsman - Allan Massie
"James Robertson's new novel is his most ambitious to date, and to my mind his best…It offers a double pleasure. First, it tells a compelling story, verging on, or even beyond, the improbable, yet susceptible to a rational explanation. Second, it is a highly intelligent meditation on the changes that have overtaken Scotland in the last half-century."

Sunday Herald - Ron Ferguson
"This is a strange book about a strange man. It tells a bewildering story, one which often seems unbelievable; but that is the point. Just when you walk away from the book in frustration, the Reverend Gideon Mack get right under your skin. That's what happens when you are under the influence of a master storyteller."

The Herald - Alison Prince "Only an extraordinary book can deal in a matter-of-fact way with the impossible. In James Robertson's new novel, did the Devil steal the minister's walking boots and replace them with a pair of trainers? Yes, it seems he really did. He created a standing stone from nowhere as well, and brewed tea in a cave deep under a waterfall. These are somewhat preposterous propositions, but the logical structure of Robertson's book nudges the reader towards accepting them as simply as a ewe is penned by a skilled sheepdog.

…the book is hugely enjoyable. Robertson writes with an academic gravity that lends solid weight to his supernatural propositions, and his narrative is leisured and discursive, and often very funny…The Testament of Gideon Mack is a deeply refreshing book, and its touch of devilry makes it even more of a joy." 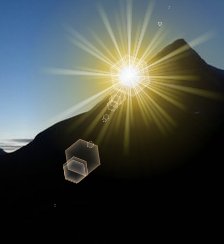 Ben Alder, where Gideon Mack was "sighted" seven months after he appears to have died by "not a very reliable witness". This photograph was taken the same day.

Photograph by "cassonf". Original photograph and this derivative have some rights reserved under a Creative Commons Licence.